Some beautiful images between a dog and a man touched everyone present at the show.

The protagonists are a stray dog and an actor.

A theatre group was performing in the middle of the street in the Turkish city of Izmit.
One of its actors, Numan Ertugrul Uzunsoy, during the performance on pretends to be injured, and falls to the ground, with wheezing breath.

A stray dog passing by, thinking that the artist was really in trouble, did not hesitate to interrupt the performance to offer his help and comfort to the man.

First he licked him on his face wagging his tail happily, then, not paying, he put his snout on his neck.

Another actor approached him worried about what might have happened.
But when he saw the sweetness of the dog’s behaviour, he started stroking it and the furry one stood on his stomach almost asking for an extra dose.

As can be seen in the video, the animal receives a standing ovation from the audience and the rest of the actors in recognition of its nobility and good work.

“I was very happy when I heard the dog’s kisses,” said Uzunsoy. “I was very moved. He was like an angel who wanted to help me. It was a very emotional moment for me. I wasn’t expecting it.”

Nobody seemed to mind that break in the company’s performance. On the contrary, the puppy’s break was a success.

“My colleagues in the cast loved the dog and the audience was very happy,” said Uzunsoy, “everyone applauded.

Now, the actor’s main concern is to find where the dog is to “help him find a home“.

Numan, in fact, has decided to return the “favour” and has been going to the place of the unusual meeting for days to find his four-legged angel, hoping to help him find a home. 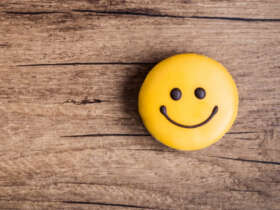