In an attempt to attract and conquer the female, this tiny spider performs a real hard to watch dance.

The acarolean Jürgen Otto managed to film the mating ritual of these creatures along the beaches near Perth, Australia.

In the dance the male raises the third pair of legs and the abdomen, making the body vibrate and approaching the limbs as if to clap his hands.
Then he raises the edges of the back of the body, a sort of rainbow-coloured fan that is similar to that of peacocks.
At times you can almost see it “shaking” to perfection!
What you wouldn’t make up to impress your partner.

What is the Peacock Spider?

The peacock spider is a small (2-6 mm) jumping arachnid belonging to the genus Maratus, a group endemic to Australia.
Males generally have colourful abdominals as well as a third leg that is elongated brown/black in colour and often tipped with white brushes.
In contrast, the females are brown/beige in colour.

During courtship, the male peacock spider raises the abdomen and waves it at the female in sync with its third leg a pair of legs.
Some males have side wings that extend from the abdomen like a fan; this fan-like structure, together with the showy ornamental colours, is reminiscent of the peacock in the act of courtship.

The scholar believes that there are currently 48 confirmed species of peacock spider of the genus Maratus, but that there are many more awaiting confirmation.

What is the habitat of the peacock spider?

Peacock spiders are the most active during the austral spring.
Adult males go out in August and stay until December.
Adult females usually appear a little later and stay longer than males, although they also become scarce by December, when they sneak in to lay and store their ovarian sacs.

Peacock spiders are widespread throughout the southern half of Australia and live in a diverse habitat, from sand dunes on temperate coasts to grasslands in semi-arid regions.

Some peacock spiders are more specialised or geographically limited; for example, M. sarahae is found exclusively on the moorland on two Stirling Ranges peaks.

Most of the peacock spiders studied are ground dwellings, which are mainly found on leaf litter under eucalyptus forests.
However, some species, such as M. speciosus, seem to be more present in shrubs or young trees (Xanthorrhoea).

How is male courtship progressing?

Peacock spiders have an elaborate courtship, even by the standards of jumping spiders.

During the search for a mate, a male waves his third pair of legs, presumably to attract the attention of nearby females.
When a male finally spots a female, he can begin courting by producing vibrations.

If the female orients herself towards the male, the male will lift her abdomen, extend her abdominal fans and shake the whole structure back and forth, accompanied by the movements of the third pair of legs that accentuate this dance.

The male courtship varies from a few minutes to more than an hour, depending on the female response.
If a male is not attacked and the female does not flee, he will slowly approach her, dancing and vibrating.

When he is about one body length away from the female, the direct contact approach begins.
This exposure lasts until the male completes his advance and attempts to mount and mate with the female.

As with courting, the duration of mating can vary from a few minutes to an hour or more.

Mating tests conducted with M. volans indicate that Maratus females are very demanding, and once a female has already mated, she is unlikely to mate again.
Compared to virgins, mated females are also more aggressive and generally spend a smaller percentage of time attending subsequent exposures of males.
Overall, the low mating rates, and the absence of multiple matings, suggest that there is strong sexual selection in this system. 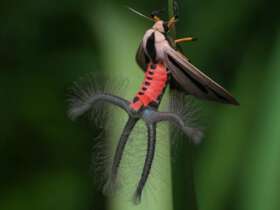